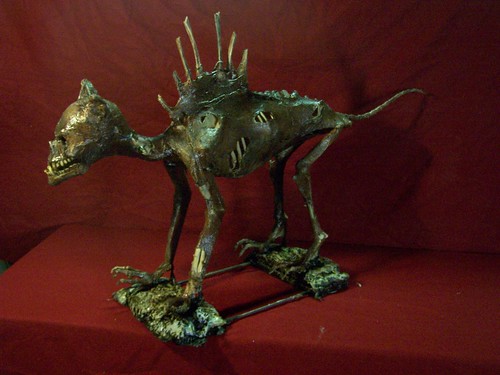 4 ft chupacabra 2, originally uploaded by Boju. This is a prop chupacabra I built for a freak show.

As part of the Dapper Cadaver Blog's Monster Mondays project today I bring you another cryptid on the brink of being real - The Chupacabra, or in Spanish, El Chupacabra.

The Chupcabra has only been with us a little over 10 years, being named in Puerto Rico in 1995. It was described as a reptilian or alien looking bipedal creature with huge eyes, a round head, and spikes down it's back. But the Puerto Rican Chupe bears little resemblance to the globe trotting hairless vampire dog thats been seen from Chile to Maine, and even Russia. Our Chupacabra haunts mostly Mexico and Texas, where its described as a hairless kangaroo-dog with spikes down it's back, or just an ugly wrinkled hairless dog, with a huge muzzle, and saber-like fangs. They can travel by running or hopping. I wonder if the hopping may be due to injury or disease? From the Russian Chupacabra of 2006 "“It’s definitely a chupacabra! It has small front and large hind paws. To begin with the animal was walking on four legs, stood on its hind legs at the water, lifting up its long tail, and then started jumping like a kangaroo,” he says. In May Dmitry is determined to seek out the Russian chupacabra along with colleagues from the Ural Ufology Monitoring Station."

In Texas multiple corpses have been recovered, centered around Cuero Texas, and most recently a video of a Chupe running down the street looking a lot like a mexican hairless. DNA evidence shows it to be closely related to, or a diseased, domestic dog or coyote.

If we drop the name Chupacabra from this tale, which is a completely different looking Puerto Rican monster that also sucks the blood of livestock, then the story gets older, and more interesting. The earliest "Chupacabra" attack I could find is in England nearly 200 years ago.

It goes something like this - "In the month of May, 1810, something appeared at Ennerdale, near the border of England and Scotland, and killed sheep, not devouring them, sometimes seven or eight of them in a night, but biting into the jugular vein and sucking the blood....Upon the 12th of September, someone saw a dog in a cornfield, and shot it. It is said that this dog was the marauder, and that with its death the killing of sheep stopped" -Charles Fort

Charles Fort then recounts of another Vampire Dog attack in Ireland in 1847, likening them to vampire bats, but finding it difficult to believe dogs can be vampires. As with the Chupacabra, the livestock was killed and drained of blood, but the body left in tact. When giant canine tracks were discovered near the kill sites, locals began shooting stray dogs on sight. During this wave of attacks several people were attacked an bitten by the vampire dogs, and suffered strange symptoms and madness.

For the next 200 years, vampire dog attacks have sporadically appeared. Like today's Chupacabra attacks, the vampire dog attacks come in waves. They're devastating at the time, often taking dozens of livestock and whipping people into a panic, but the soon halt. Whatever is going on, it's clear we're not dealing with a species that feeds on blood to survive generation after generation. Could we be dealing with a mutant? A disease? A madness? Malnutrition? The Supernatural? Could something be driving otherwise normal canines to become vampires?

Here's one of the Texas Chupe specimens. It's DNA showed it was most likely a coyote, but the muzzle is much thicker and the canine fangs are much longer. While mange may explain hair loss, something else would need to explain the changes to this "coyotes" teeth and snout.