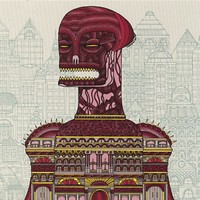 When Captain Cook first landed on the Isle of Flores and brought the island to attention of the Western world, the natives told him they were not alone.

They said the island was also inhabited by little people calle Ebu Gogo or Ebu Gobo.

Later anthroplogists gathered more stories of the Ebu Gogo. Ebu means grandmother, and while Gogo or Gobo has no direct translation, it roughly means little grandmother who eats everything. Unlike the little people of Ireland and elsewhere, the Ebu Gogo had no magical powers. The natives considered them at best a pest, and a worst a dangerous boogie man that would eat children. They were only a few feet tall, with large arms and other monkey like traits, but not quite monkeys, and not quite people. They spoke their own language and wore clothing.

The natives tell their children not to wander in the woods or the Ebu Gogo will eat them. 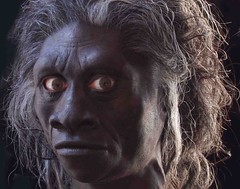 The natives also say how the last Ebu Gogo died.

The Ebu Gogo had become an increasing nuisance in the village, stealing crops and livestock and damaging property. The villages wanted to make peace with them, so they invited them to a festival. A great bonfire was lit, and though the Ebu Gogo seemed to fear the fire, they all sat around it, human and little person alike. Then the foods were served. The Ebu Gogo did not know how to use plates or silverware, and through their utensils to the ground, which was a great insult to their hosts. They then ate everything, their share and the villagers share alike. One Ebu Gogo grabbed a human baby, and began eating that. At once the Ebu Gogo were chased out of town, where they holed up in a cave. The humans did not want to go in the cave, for they might be trapped, so they came up with a plan.

The next day they came to the mouth of the cave and told the Ebu Gogo that they wanted to make peace again, and they brough new clothes as a peace offering. With long bamboo poles they pushed in the clothing, which the Ebu Gogo began putting on. The clothes however were soaked in the natives lighter fluid type oil, and when all the Ebu Gogo were dressed the human burned the bamboo poles and lit all the Ebu Gogo on fire, burning them alive.

Up until 2 years ago the stories were considered to be about fantastical fairies, or monkeys, even though the natives insisted they were people.

Then a skull turned up in a cave belonging to a human less then 3 feet tall with a brain no bigger than a chimpanzee. Even dwarfs of similar stature only have brains about 15% smaller than a full size person, but this person had a brain nearly half our size. At first the evidence seemed to support it being a freak, a microcephalic individual, but then more bones turned up. In all 9 tiny individuals have been unearthed, stretching a time span of thousands of years. The youngest specimen dates back merely 12,000 years at a time when humans were thought to be the lone hominid on earth, and we had already begun agriculture.

The bones have been named Flores Man, and nicknamed the Hobbit.
They seem to be descendant from Homo Erectus.