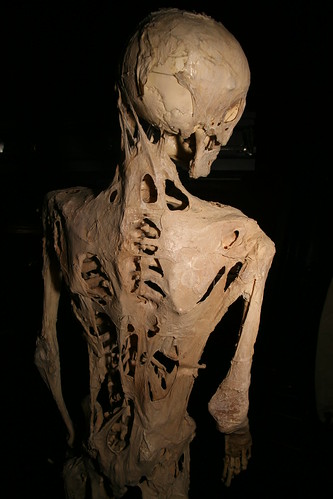 Of all the causes of death I've recreated over the years none raises more questions than the case of poor Harry (Henry) Eastlack.


I created the Henry skeleton for a set based on the Mutter Museum in Philadelphia, where the real Harry Eastlack resides. Harry was born normal except for a big toe only slightly too large and irregular.


At age ten the muscle and flesh around his bones began turning to bone, a process called "Ossification" and sometimes poetically referred to as flesh turning to stone. Ossification is a normal process for growing and healing bones, but in Harry's case it was running amok. The disease Harry had was named Fibrodysplasia Ossificans Progressiva. The first symptom was bony nodules on his neck and shoulders, which when removed, triggered the growth of large nodules. Shortly after the onset of Ossification, Harry was unable to move any part of his body except his lips, and he was hard as wood to the touch.


Harry died 43 years later of pneumonia and willed his unique body to the Mutter Museum. Here's the real Harry's skeleton


Joseph Merrick, the Elephant Man, did not have FOP Ossification. He was once considered to have been afflicted with either elephantiasis or neurofibromatosis type I or the very rare Proteus syndrome or perhaps a combination of the later two conditions.